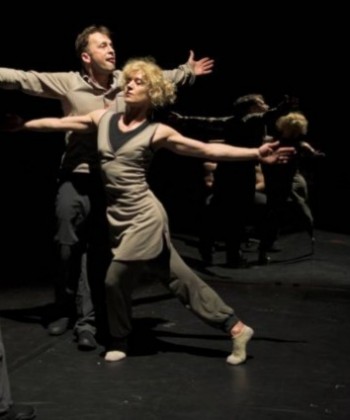 You mean where have I been for the last 30 years? Here, I can clear myself. And I will clear you too, so that you can clear me later in return. I am reflected, therefore I am. A hiatus wedged between two ditto marks.

Hilarious and grotesque, this vaudeville of self-reflection presents The Symptoms — a troupe fond of special effects and technical solutions — using a special mirror wall to conjure up an inner world filled with struggle, which we continually fabricate an “alibi” to repress and sweep under the carpet. In the course of the interrogation, laced with music and dance, the actors, called by their real names on stage, make confessions about their own lives. In the process, the viewers in the audience stare their own reflections in the eye.

In 2008 the production garnered the Grand Prize at the Alternative Theater Festival in Hungary, as well as the Forgács Prize “for the funniest moment” at the Deszka Festival in Debrecen and it was shown to great acclaim in Savoy Teatteri Helsinki, at the Festival Theatre European Regions in Hradec Králové in the Czech Republic and at the Mittelauropäisches Theaterkarussel Festival in Vienna.

Starting with the 2010/2011 season, Alibi is featured on the repertory of the Katona József Theater in Budapest.

“The act captures intimacy, beauty, and anguish behind a plane of glass, spotlighting appearances, the ordinary and the banal, the cabaret-farce-revue genre, coarseness, and human experiments aimed at eradicating pride and self-respect. All the while, Szabó seems to encourage us, with an intelligent but gentle touch, to stare our own worst fears in the eye.”