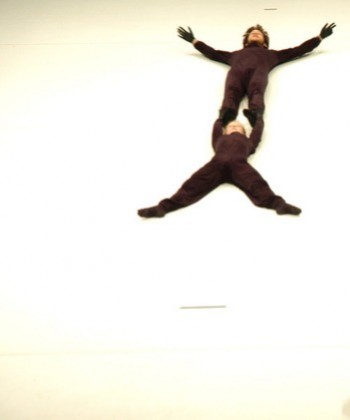 Cartoon with living characters. The movie was awarded at the 42nd Hungarian Film Week and Timishort Film Festival.

The black and white experimental short film is an abstract cartoon with live people. Its visuality emerged from a former performance of Réka Szabó’s dance company, The Symptoms. Nothing There (2008) uses a unique video technique that transforms both the performers and their shadows into living figures on stage.

Shadow Movie is dealing with the experience of nothingness, the impossibility of meeting and finding each other; but above all, it is a play with forms. The film premiered on October 8, 2010, at the EDIT2010 6th International Dancefilm Festival in Budapest.

“The genre dance film is starting to be familiar in Hungary as well; however, it is often being confused with a documentation of dance performances with a more or less artistic cut. Using dance as a tool, we are aiming at making a film with a special language, that we call ‘a cartoon with live people.’ This film is inherently abstract and absurd; nevertheless, it has an easy to follow narrative-emotional plot.” (Réka Szabó)